in Actors and Performers, International, Producers 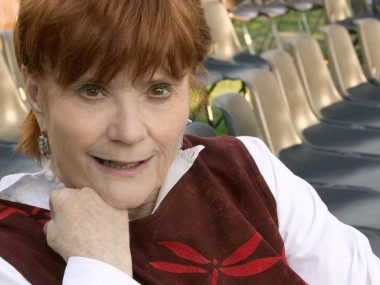 INTERVIEW: THELMA HOLT. Still, at 85, a force in British theatre, Thelma Holt began producing international seasons in the 1980s.  Ebullient as ever,  this year she is again bringing Yukio Ninagawa’s “cherry-blossom”production of Macbeth to the Barbican, to celebrate its thirtieth anniversary. Here she tells Heather Neill about her career, as a RADA-trained actress, then as a producer at the Round House and afterwards for Peter Hall’s National Theatre and for her own company, showcasing such famous productions as the Georgian Richard III, Matthew Warchus’s Much Ado about Nothing, The Doll’s House with Janet McTeer and the Redgraves’ Three Sisters. Interview recorded on 5 September 2017 at the Noel Coward Theatre.

“[As a producer] you need courage of a certain sort. Above everything, you need belief in you and belief in the people you’ve chosen. You also need to be absolutely confident that in the team around you there are people who do certain things that are a lot cleverer than you are. I don’t want to direct plays; I never have.”