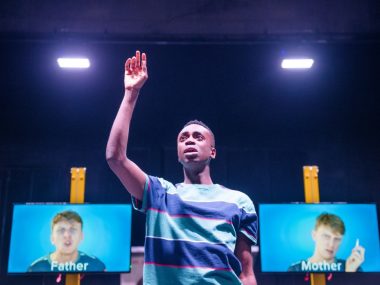 INTERVIEW: PAMELA CARTER AND STEWART LAING. Playwright Pamela Carter and director-designer Stewart Laing have worked together on a string of ground-breaking shows since Slope in 2006. In the original version of that production, the audience sat above the stage, peering down on a series of bathrooms where the 19th-century poets Arthur Rimbaud and Paul Verlaine conducted their affair. Similarly inventive were productions including Paul Bright’s Confessions of a Justified Sinner, a fusion of exhibition, documentary and lecture, The End of Eddy, performed by two actors and four TV monitors, and Them!, featuring a cast of live ants. They talk to Mark Fisher about formal experimentation and their continuing creative relationship. Recorded on 27 October 2019.

“For me there’s no searching for perfection. Perfect art is just not interesting. I like art that’s messy. Who wants to engage in perfection?” Stewart Laing