You are here: Home » Audio » Comedy » Ian Hislop and Nick Newman talk about The Wipers Times

Ian Hislop and Nick Newman talk about The Wipers Times 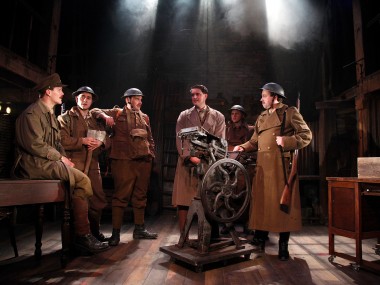 Perhaps best known for their work at Private Eye, long-term writing partners Ian Hislop and Nick Newman talk to Judi Herman about The Wipers Times, a stage adaptation of their award-winning BBC film now playing at The Watermill Theatre. It is based on the true story of the eponymous satirical magazine, written and published in the trenches of the First World War, and the writing partnership – not unlike Hislop and Newman themselves – behind it. Recorded at the offices of Private Eye on 13 October 2016.

The Wipers Times is at The Watermill Theatre to 29 October 2016 then tours to Sheffield Theatres 3-5 November, New Wolsey Ipswich 7-12 November, Playhouse Salisbury 14-19 November.

“The problems of turning their humour into theatrical spoofs and music hall turns, that bit we could all do. Nick and I have been writing sketches since Spitting Image, we’ve been writing stuff for the page. We know how to turn one into the other. The difficult thing was finding a way of telling their story – and working out what the story was really. Who’s the star of this? Is it the printing press? Is it Roberts and Pearson? (Is it their story) or is the star the magazine? That’s what we had to try and work out in the play.” Ian Hislop

“We want to share what we discovered, which was these men a hundred years ago making these jokes which we think are very, very funny. Happily the audiences we experience these jokes with have also found them incredibly funny.” Nick Newman