You are here: Home » Audio » Shakespeare and Renaissance Drama » Harriet Walter talks about playing Prospero in the Donmar’s Shakespeare Trilogy 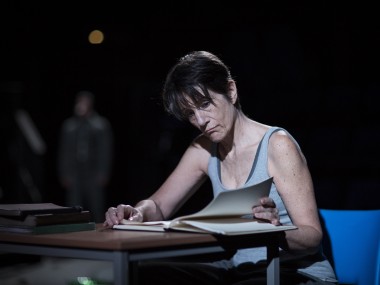 INTERVIEW: HARRIET WALTER.  Dame Harriet Walter talks to TheatreVOICE’s Heather Neill about playing Prospero in the final part of Phyllida Lloyd’s The Shakespeare Trilogy at the Donmar Temporary theatre at King’s Cross. In 2012, Phyllida Lloyd’s all-female production of Julius Caesar placed the play in a women’s prison. It stunned audiences on both sides of the Atlantic and challenged the idea of ‘who owns Shakespeare?’ In 2014, Phyllida reunited with actor Harriet Walter for Henry IV, the second instalment in what was then announced as a trilogy of works from these major artists. This autumn the project concludes with The Tempest. This interview was recorded on 8 December 2016 at the King’s Cross temporary theatre.

“You have to connect with the audience here tonight, not resurrect some style you used 20 years ago.”