You are here: Home » Audio » Actors and Performers » Pippa Nixon on four of her Shakespearean roles for the RSC

Pippa Nixon on four of her Shakespearean roles for the RSC

in Actors and Performers, Feminism, Shakespeare and Renaissance Drama 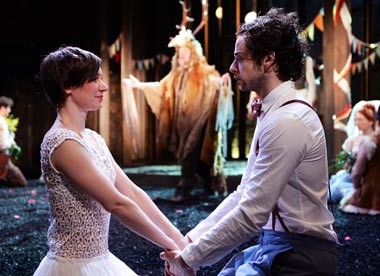 The actress, who is currently playing Rosalind in As You Like It, directed by Maria Aberg, and Ophelia in Hamlet, directed by David Farr, for the Royal Shakespeare Company, talks to Judi Herman about these female roles; and about playing the Bastard in King John and Lady Anne in Richard III last year. Recorded at the RSC Media Centre, 29 May 2013.

Rosalind is everything that Ophelia can’t be and at the end of Hamlet there is no life left in Ophelia and Rosalind is all life. So when I play both in one day, I don’t know which I prefer to start with. Do I start as Ophelia and then come back to life as Rosalind, and walk out of the theatre in good spirits? Or do I start with Rosalind who is so full of life and then go into Ophelia who is so contained and ends up dead?