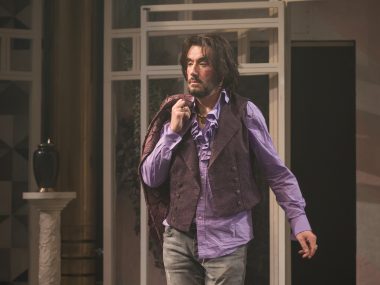 INTERVIEW: TIM MCMULLAN. Tim McMullan is an original Sir Toby Belch in a National Theatre production of Twelfth Night, which has many unusual features, not least a female Malvolio, renamed Malvolia, played by Tamsin Greig. At the heart of Simon Godwin’s riotously funny production, McMullan and Daniel Rigby as Sir Andrew make a hilarious double act, supported by Niky Wardley’s mischievous Maria. This interview was recorded at the National Theatre on 3 May 2017.

“The way we play it, it’s Maria who wants to go further than Toby in cruelty to Malvolia. You can imagine them being a couple that enable each other’s addictions in the future”