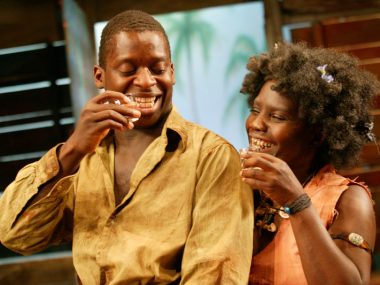 ARCHIVE INTERVIEW: MUSTAPHA MATURA AND NICOLAS KENT. When Mustapha Matura died in October 2019, he had become one of the most important dramatists in Britain. Matura was born and grew up in pre-independence Trinidad, and his early life and home country shaped his work. His plays often explored colonialism and its legacy, and used humour to communicate sharp satire and political insight. Just before the 20th anniversary revival of his Trinidadian rewrite of The Playboy of the Western World, Dominic Cavendish spoke to the playwright along with Nicolas Kent, artistic director of the Tricycle Theatre.

“I’ve had a fairly comfortable ride, but that’s not to say there weren’t moments when people wouldn’t read my plays or even return my calls.”