You are here: Home » Audio » Actors and Performers » Finn and Lewis Den Hertog

in Actors and Performers, Design, Directors 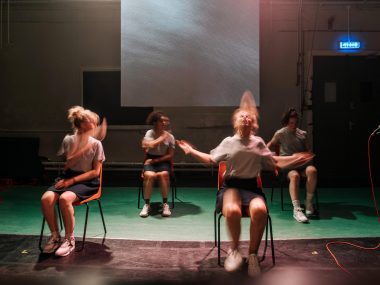 INTERVIEW: FINN AND LEWIS DEN HERTOG.  The sons of actor Ann Louise Ross and production manager Nils Den Hertog, brothers Finn and Lewis Den Hertog spent their formative years in and around Dundee Rep. Finn was quick to join the family business, working first as an actor then as a director. Lewis thought he was branching out by studying art, but was drawn back into the theatre as a video designer. As well as working independently, they have collaborated on a number of productions and, with choreographer Vicki Manderson, they are part of the core team of Groupwork, which is producing The Hope River Girls as part of the Edinburgh International Children’s Festival, 7–15 May 2022 www.imaginate.org.uk/festival. Recorded on 7 February 2022 in Glasgow.

“In Edinburgh, you’ve got the Lyceum, the Traverse and then there was
the Job Centre – a sort of triangle – and we’d be taken to one of those
three places when we were younger. We understood there was nae
money in it.” Finn Den Hertog.