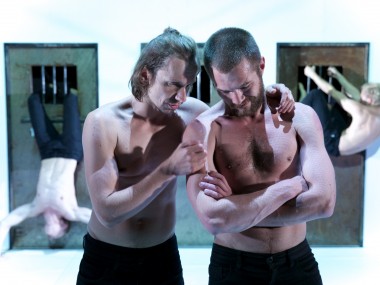 INTERVIEW: MARIA ALYOKHINA. The performer and activist, Maria Alyokhina, talks to Judi Herman about the difference between taking people by surprise in public places as part of Pussy Riot and engaging with a theatre audience with Belarus Free Theatre in their current show, Burning Doors (named for the burning of the doors of the KGB by Petr Pavlensky, one of the artists whose story is told in the show alongside those of Alyokhina and Oleg Sentsov). She is accompanied by BFT’s Natalia Kaliada, who also takes part in the conversation. They make it clear the aim of the show is to publicise the cases of political prisoners including Ukrainian filmmaker Oleg Sentsov, sentenced to 20 years imprisonment in 2014 for unsubstantiated terrorist charges, after the annexation of Crimea. Recorded at Soho Theatre on 21 September.

“Here [in the theatre] is more human connection between us who are on the stage and people who are not on the stage; and actually in my opinion the most important thing is that there is no border between audience and us. I really hope the audience feel what we are feeling.”