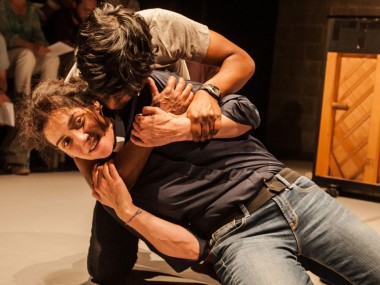 Actors Touring Company’s Artistic Director, who directed The Events, David Greig’s shattering new play about the fallout from a mass shooting similar to that perpetrated in Norway by Anders Breivik, speaks to Judi Herman about the play, which takes place in a hall where a choir rehearses, faithfully represented by Chloe Lamford’s spare set, and tours in the UK and Europe till the end of the year. Recorded at The Young Vic, 16 October 2013.

We’re very, very powerless in the sense that something happens, we listen to it on the radio, we open the newspaper and it torments us, and it gets inside our heads and it affects us, but what can we do, and to dramatise that is not easy, but that’s the decision that we took.