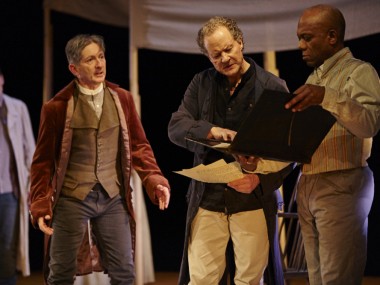 Two actors (Hope plays the title role and Caesar plays James, his cook, born into slavery) in Timberlake Werternbaker’s new play Jefferson’s Garden (Watford Palace Theatre), talk to Judi Herman about the play, which tells the story of the American Revolution of 1776 against the British, and Jefferson’s drafting of the Declaration of Independence through the eyes of a young Quaker, Christian. Both actors are part of a powerful ensemble in Brigid Larmour’s production. Recorded at Watford Palace Theatre, 11 February 2015.

This is one of the great bittersweet qualities of Timberlake’s writing is that she really wants to bring out the humanity of the people, the humanity of the historic and political views and visions and alas there is no such thing as a perfect society, the bad redcoats and the good Americans.