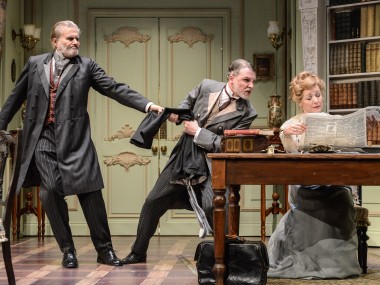 INTERVIEW: OLIVER COTTON. The actor talks to Heather Neill about his early career in Olivier’s National Theatre company in the 1960s, his writing for the stage, and performing in farce, in particular Bang Bang at the Mercury Theatre, adapted from Feydeau by John Cleese, directed by Nicky Henson and designed by David Shields. The interview was recorded on 4 March 2017 at the Mercury Theatre, Colchester.

“Just about every fourth word is plot and the props are crucial: if you get them in the wrong pocket you can drag out the wrong thing and that’s very frightening!”