You are here: Home » Audio » Adaptation » Walter Meierjohann on directing The Emperor

Walter Meierjohann on directing The Emperor 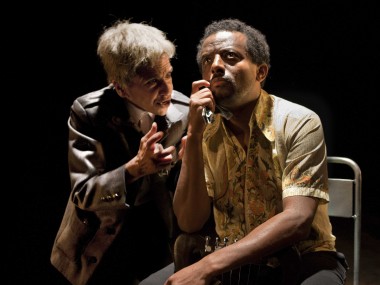 Walter Meierjohann directs Kathryn Hunter in The Emperor, Colin Teevan’s adaptation of Polish journalist Ryszard Kapuściński’s book. Hunter plays eleven of the faithful servants of Emperor Haile Selassie of Ethiopia, charting his reign and downfall through their eyes.  In two complementary interviews (each of which also stands alone), they speak to Judi Herman about building up a picture of the Emperor and his reign, of these eleven men and what it says of the nature of power. And they speak about the collaboration at the heart of their work with Teevan and with Ethiopian musician Temesgen Zeleke and the whole creative team. Interview with Walter Meierjohann recorded at Sadler’s Wells Theatre, 19 September  2016.

“We discussed should we have an appearance of Haile Selassie, should Kathryn at some point transform because there’s quite a big physical similarity, she could have easily done it. Or we discussed the musician to appear in the chair as Haile Selassie. But then we thought no, the book clearly states it’s about him, never the physical presence. We want to create the image in the imagination of the audience”