You are here: Home » Audio » 19th-Century Drama » Simon Stokes makes us shudder at the gory thrills of Grand Guignol 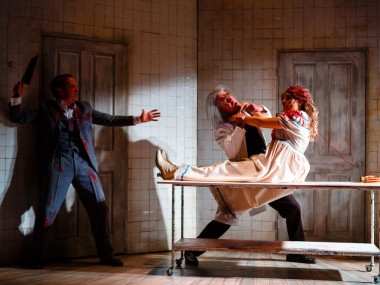 The Artistic Director of Theatre Royal Plymouth talks to Judi Herman about his production of Karl Grose’s Grand Guignol, which graphically revives the onstage gorefests played at the famous Paris theatre, first at TRP and then at Southwark Playhouse; and about Theatre Royal Plymouth and its programme for 2015. Some background noise. Recorded at the National Theatre, 6 November 2014.

Horror theatre often was synonymous with scientific development, so a lot of these little plays are set in asylums or hospitals. This is where the horror happens, how do you take somebody’s eye out… this is all part of the filigree of scientific advance and moral horror.