You are here: Home » Audio » Adaptation » Paul Hunter talks about The Little Matchgirl at the Globe

Paul Hunter talks about The Little Matchgirl at the Globe 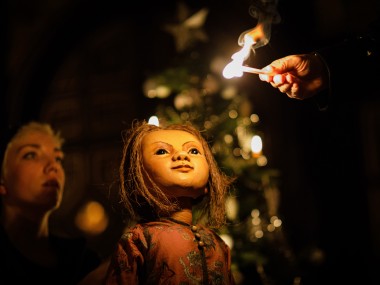 INTERVIEW: PAUL HUNTER. The actor talks to Judi Herman about The Little Matchgirl and Other Happier Tales, the seasonal show at Shakespeare’s Globe, directed by Emma Rice at the candlelit Sam Wanamaker Playhouse. A contemporary take on Hans Christian Andersen’s heart-breaking tale, the production incorporates other Andersen tales which are told to the little matchgirl by Ole Shuteye, played by Hunter. Shuteye is a larger-than-life character who owes something to music hall and is assisted in his storytelling by a motley troupe of travelling street players .The Little Matchgirl is played by a puppet. Recorded at Shakespeare’s Globe on 13 December 2016

The Little Matchgirl and Other Happier Tales continues at the Sam Wanamaker Playhouse at Shakespeare’s Globe Theatre to 22 January 2017.

“What it allows the audience to do is to read lots of things on to the puppet, the way you wouldn’t with an actor, a child. And I think it becomes much more moving.  I try to ensure that whenever I have moments alone with the Matchgirl, that I’m playing with the puppet like any other actor. I think there’s a danger when you play opposite a puppet, even though not intentionally, as an actor you can easily patronise the puppet. The key thing for me is that absolutely this is just another performer.”