You are here: Home » Audio » Actors and Performers » Kathryn Hunter 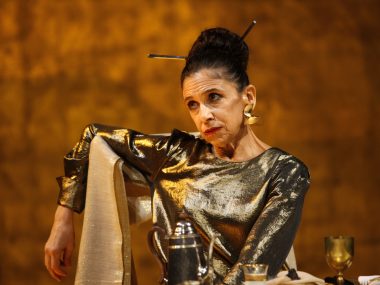 INTERVIEW: KATHRYN HUNTER. Having just played Timon of Athens for the Royal Shakespeare Company – a production that will go to New York in due course – Kathryn Hunter has added another improbable role to an eclectic CV. She won an Olivier Award in Complicite’s revival of The Visit, played King Lear before turning 40 and played a chimpanzee in the solo show Kafka’s Monkey. Talking to Heather Neill, she discusses the roots of her physical approach to acting and how performance informs her directing style, as well as looking back on some of her recent roles. Recorded in London, March 2019.

“Wherever you are, even if there are three people in the audience, you commit to making something happen – here and now”