You are here: Home » Audio » Actors and Performers » Mark Puddle and Jonathan Bullock on the Lord Chamberlain’s Men Romeo and Juliet

in Actors and Performers, Producers, Shakespeare and Renaissance Drama 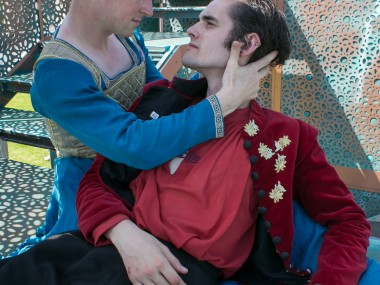 The Lord Chamberlain’s Men is an all-male open air theatre company, named after Shakespeare’s original troupe of travelling players, that aims to present dynamic productions, mainly of his work, to venues that include some of the UK’s stately homes. Creative Producer Mark Puddle, who founded the company in 2004, and Jonathan Bullock, playing Juliet in this year’s production of Romeo and Juliet, talk to Judi Herman about their work. Recorded at Guildhall School of Music and Drama, 11 August 2014.

The original concept came from something we found that basically stated that when the plague was on in London, Shakespeare took a group of seven actors out on tour and he visited stately homes and village greens and town squares to earn some money.