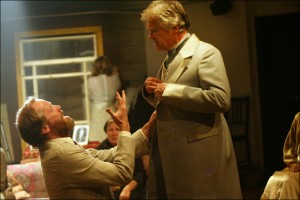 The director talks to Heather Neill about her revival of Chekhov’s Uncle Vanya, in a new version by Mike Poulton, which has enjoyed such a successful, sell-out season at The Print Room, the Bayswater studio theatre which she co-runs with Anda Winters, that it gets an extended further three-week run in June and July. Recorded at The Print Room, 26 April 2012.