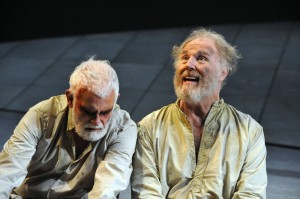 I made the decision not to use real rain in the storm scene because it never really works for me, and instead we have some live percussion.