in Edinburgh Festival and Fringe, Reviews and Roundtables 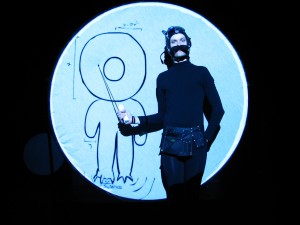 Tim Watts in the micro-epic The Adventures of Alvin Sputnik: Deep Sea Explorer at Underbelly

Philip Fisher joins Mark Fisher (Scotland on Sunday) and Lyn Gardner (Guardian) to talk about offerings at the Traverse, International Festival and the remainder of the Fringe.

The Wind-Up Bird Chronicle was like a magpie – it had gone around looking at lots of bright shiny things in other productions and had borrowed them. Great artists do indeed steal but I think  in this instance what we actually got was something that felt quite second-hand.