You are here: Home » Audio » Actors and Performers » Director and cast of the RSC First Encounters Taming of the Shrew share their views

in Actors and Performers, Directors, Feminism, Shakespeare and Renaissance Drama 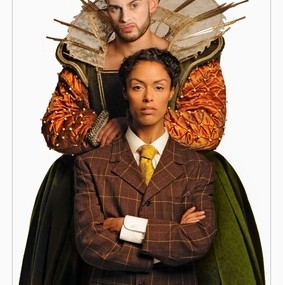 SHAKESPEARE: THE TAMING OF THE SHREW

Director Michael Fentiman, actors Katy Stephens (Petruchio) and Forbes Masson (Katherina) talk to Judi Herman about the RSC’s First Encounters version of the play, which has been touring schools in a stripped-down, fast-moving production, 75 minutes in length, with the male roles played by women and vice versa. Recorded at Nicholas Chamberlaine School, Warwickshire, 4 February 2014.

I was keen that we didn’t approach the play with any sort of agenda, so the reason for the device of the cross gender is to free the play up so the young people maybe can forget about it and focus on the story and the narrative of the play and then go away and have their differing opinions on what the play’s about.