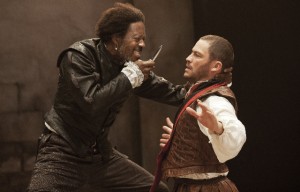 The artistic director of Sheffield Theatres tells Heather Neill about his programme to celebrate the Crucible theatre’s 40th anniversary, and discusses his current production of Othello, starring Clarke Peters and Dominic West, in detail. Recorded at the Crucible, 5 October 2011.

In our production, Othello is a general in his fifties and a foreigner – he doesn’t come from this place, but even just before he kills himself he says that his honour demands his loyalty to the state