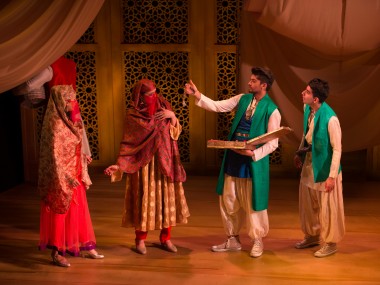 INTERVIEW: PRAVESH KUMAR. The artistic director of Rifco Arts talks to Judi Herman about Laila – the Musical, the British Asian theatre company’s current touring production, based on a story of star-crossed lovers and feuding families from 5th century Arabia and then Persia, that predates Romeo and Juliet by many centuries – and Kumar talks too about Rifco’s work to bring a diverse audience into the theatre, including British Asians from all communities and faith groups. Recorded at Rifco’s base at Watford Palace Theatre on 12-May-2016. Tours to June 4, details here

“We make work that is organically truthful and when British Asians and South Asians come and see it they say ‘that’s me, that’s my life onstage.” And then you’ve got the other spectrum of the audience [who are] coming to be part of it in a different way, [where they are] going “I’ve not seen this before. I want to learn something new or have a new experience.”